Home » About Us » The MacFarland Hubbard House: Its Renovation (Exterior and Carriage House)

The MacFarland-Hubbard House was built in the Greek Revival style that was popular in the decades prior to the Civil War.  The massive columns and triangular pediment are features of the style made to resemble ancient Greek temples.

The columns are original to the house. One had to have extensive repair.  All restoration work was done by West Virginia companies and craftspeople, with the exception of the keystone mason.

Sunroom after pergola was added

The Crowleys had made extensive renovations in the 1920s, adding the sunroom, the porte cochère, and the current carriage house, which replaced an earlier building.  The original second-story gallery on the front of the house was removed and replaced with the existing balcony.  Leaded glass windows flanking the front door were likely also added during this period.

The yard was raised approximately two feet when the Boulevard changed. It is known that this is one of two houses that did not flood in the 1861 Great Flood. 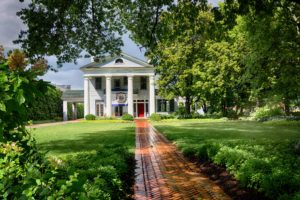 The gardens and trees were preserved to the best extent possible. Following the Council’s purchase of the home, donated boxwoods were added to the front, and other landscaping was tailored to the period design of the house.  In 2011-2012 the Council did extensive landscaping work, installing a landscape plan designed by Triad Engineers. A flagstone pathway was installed, making the front and back yards more accessible.  This work restored historic flower beds, added a new exposed aggregate driveway to replace a gravel drive, and improved drainage around the house’s foundation.  The brick sidewalk was regrouted in 2002 and again in 2011, but the same bricks that came with the house remain. 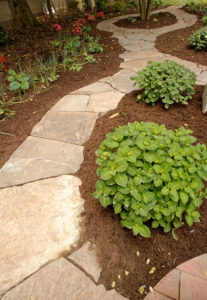 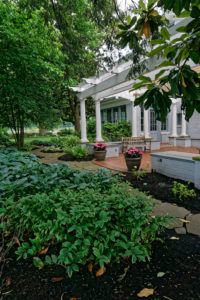 Mindful of the stewardship of this historic property, the Council agreed that no structure would be built in front of the house, and that the parking lot in the back (which was a wooded area) would not be seen from the front of the house.

The original footprint of the house was essentially a two-story square.  The first floor of the rear ell addition was constructed prior to 1874, as it appears on a map dated that year; the second floor was added in the 1940s, when the Hubbards purchased the house.

When the Council purchased the property, the back porch was fully enclosed with latticework and had a wooden floor.  It was restored to fit the original plan and was designed to be accessible.

A parking lot and shed replaced the rear wooded lot, but was designed to be hidden from street view, to preserve the historic integrity of the property.

In 2008, a side porch and pergola structure were added to increase programming space.