Home » About Us » The MacFarland Hubbard House: Its Renovation (Second Floor)

The second-floor landing, reached from the first-floor front hall, provides access to two halls, and features a brass chandelier that was hanging in the original library on the first floor when the Council purchased the property.  A small hall provides access to the attic stairs as well as a room (currently the Fiscal Officer’s office) that was likely at one time a nursery.  Evidence of a fire in the attic above this room suggests the reason for the lower ceiling in this space.  Prior to the Council’s purchase of the house this room had most recently been used as a walk-in closet, via a direct door to the master bathroom.

The center hallway was altered to meet fire marshal requirements.  Some doorways to the hallway were created and others were sealed up, allowing the council to put needed wiring and heating/cooling into the walls while retaining the house’s historical integrity.

The current Executive Director’s office was the master bedroom. It opens onto the balcony, which was once a full gallery.  The master bedroom features one of eight fireplaces in the house, all formerly converted to gas, with one currently in working order.  Original fixtures were preserved when possible.  Ceilings in this part of the house are 10 feet high.  Prior to renovation, this room’s en suite master bathroom had a door leading to a walk-in closet.  The bathroom is original to when plumbing was installed.

At one time the hallway outside of this room was part of the development office, as evidenced by the crown moulding continuation in the hall.  The hallway was likely added when the second story addition was constructed.  When the Council purchased the house, this office included a door leading directly to the rear steps.  When closets in the rear hall were removed to provide common access to the rear steps, the door in the development office was closed off.  This office was wired for two workstations.

When the Council purchased the house, the entrance to this office was at the top of the front steps.  A second door on the opposite wall led to the Program Officer’s office.  The Council closed off both doors and added a door to the main hall, where it was once located.  A closet next to the fireplace was also enclosed and is now used as a chaseway.

The Program Officer’s space was originally a screened-in “napping” porch. The room was difficult to accommodate for modern needs, due to its solid masonry walls and baseboards. In order to put in computer wiring, the baseboard was set out an inch and the historic look was preserved.  Over 30 windows in the house were restored to working order, include all of the windows in this office.

The rear office, the largest in the house, was Ms. Hubbard’s bedroom.  Her fireplace is done in a French style, perhaps to reflect her scholarly interests as a French tutor.  The room includes two hidden closets behind the built-in bookcases, and a sewing table that pulls out from the wall under the window.  The purpose of one odd cabinet in the wall remains a mystery.

The small copier room was once an en suite bathroom. The plumbing was removed, and it was converted into a copier room. 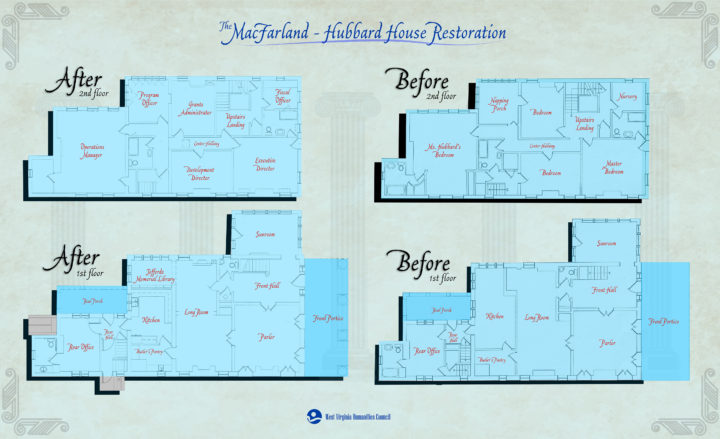