The MacFarland Hubbard House: Its History

Home » About Us » The MacFarland Hubbard House: Its History

The MacFarland Hubbard House: Its History

The MacFarland-Hubbard House was built in 1836 by Charleston builder Norris Stanley Whittaker, on land purchased from Isaac Noyes.  It is a landmark property listed in the National Register of Historic Places, and one of only a handful of antebellum houses remaining in the Charleston area.

Whittaker built the house “on spec”—he did not have a definite buyer during the building, but hoped to secure one when the job was complete.  He built this house while he was in his mid to late 20s, along with the Rand House next door (a near twin) and the Thayer House on the corner (the current location of the UMWA), all at about the same time. The MacFarland and Rand houses were built from unfired brick made on site, and in keeping with southern construction traditions, the bricks were painted to seal them. (Click any image to view larger) 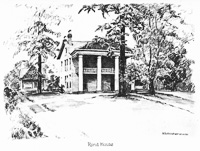 The first owner of the MacFarland-Hubbard House was Henry Devol MacFarland, a wealthy merchant who purchased the house on December 19, 1836.  MacFarland resided here with his wife and two young children until his death in 1845.

Newly discovered census records indicate that MacFarland enslaved at least five individuals.  Though the property was not used as a farm or plantation, the lot was at that time much larger than its current size of 3/4 acre, and likely included gardens, a stable, and other outbuildings.  The original lot extended across what is now Virginia Street, and nearly 2/3rds of the way to Quarrier Street. 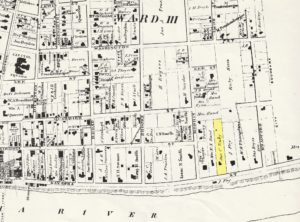 The house’s second owners were the Ruby family.  John C. Ruby II and his wife, Mary Frances Noyes, daughter of wealthy salt-maker and merchant Bradford Noyes, were residing in the house by 1851.  Ruby established a grocery business on Kanawha Street in Charleston, and served as mayor from 1875-77.

During the Civil War, when the Union took control of the Kanawha Valley, the Rubys removed to the South.  In the fall of 1862 Union troops were pulled from the valley for the campaign against General Lee, just before the Battle of Antietam.  As the Confederates recaptured the valley, a round shot from a field cannon was fired into the house (though the house was not the intended target).  It is thought to have been fired from what would now be the riverbank of the University of Charleston, just under a mile away as the crow flies.  For a time during the war, the house was used as a makeshift hospital for wounded and recovering soldiers. (Read more about the Battle of Charleston at e-WV: The West Virginia Encyclopedia.)

When the Rubys returned at the end of the war, the convalescing soldiers were moved from the house to a tent hospital on the lawn.  Following the war, the census listed Ruby, his mother, five children, and three domestic servants residing at the property.  Though verification has yet to be found, it is possible that these servants, David, Harriet, and John Jefferson, were enslaved prior to and during the war.

The Rubys sold the house in 1921 to the Crowley family, who undertook substantial renovations.  It is likely that this transfer of ownership involved partitioning of the original property into the lot as it exists today, as during this period Ruby formed the Ruby-Sterret Packard car dealership, headquartered in the red brick building situated to the rear of the property currently.

John B. Crowley worked in wholesale and real estate, and underwrote the construction of Charleston’s Hotel Kanawha, Holley Hotel, and Capitol Theater.  Though the Crowleys lived in the house for only a short period, their alterations to the house effectively brought twentieth century standards of amenity into it. Hardwood floors were laid down over the original heart of pine flooring, the current staircase was installed, the sunroom, porte cochère, and carriage house were added, and other small updates were made.

In 1941 the Crowleys sold the house to the Hubbard family, known in the Charleston area for the Hubbard Grocery Company.  John W. Hubbard died the following year, leaving equal shares of the house to his daughter Elizabeth and wife Mary Ashby Hubbard.  Elizabeth lived in the house with her stepmother Mary and half-brother Bill, who left for the Navy shortly after the Hubbard women assumed ownership.  During their residency the Hubbard family added the rear second floor, creating a new master bedroom, and also extended the kitchen to the southeast exterior wall.  Mary, upon her death in 1966, bequeathed her half of the house to Elizabeth.

Having no heirs, Elizabeth left the house and its contents to the First Presbyterian Church of Charleston when she died in 1997.

The Council purchased the house from the Church in 1998, and immediately undertook to renovate and restore it for use.