Our video of broom maker James Shaffer went viral on the Internet, was featured by West Virginia Public Broadcasting, and shown at the Library of Congress.

We partnered with McArts to host a concert with songwriter Elaine Purkey at Ya’sou Greek Restaurant in McDowell County.

We supported a Jefferson County project to transcribe letters from former slaves who immigrated to Liberia in the 19th century.

The documentary, Vietnam: West Virginians Remember, was made possible by a Humanities Council grant.

Our annual McCreight Lecture, “The Humanities and the Future of Democracies,” was presented by Azar Nafisi to a full house in October.

We launched the West Virginia Folklife Apprenticeship Program, with support from the National Endowment for the Arts.

In 2017 the Humanities Council awarded 48 grants and nine fellowships in 18 counties.

We funded the symposium “Humanities in the 21st Century,” a collaborative project between Shepherd University and the National Conservation Training Center.

We recorded interviews in 15 counties as part of our folklife fieldwork.

We partnered with the National Archives to present a special Bill of Rights exhibit at 41 sites across West Virginia.

A major grant supported an exhibit and weeklong program at Pricketts Fort on the African American experience on the Virginia frontier.

We presented 141 History Alive living history programs in 44 counties with portrayals of historical figures such as reporter Nellie Bly (JoAnn Peterson of Kingwood).

We partnered with the Southern Foodways Alliance to document the traditional foodways of the Swiss community of Helvetia.

Nine fellowships were awarded to researchers in Morgantown, Huntington and elsewhere.

We supported the return of director John Sayles for the 30th anniversary of Matewan, his movie about the West Virginia Mine Wars. 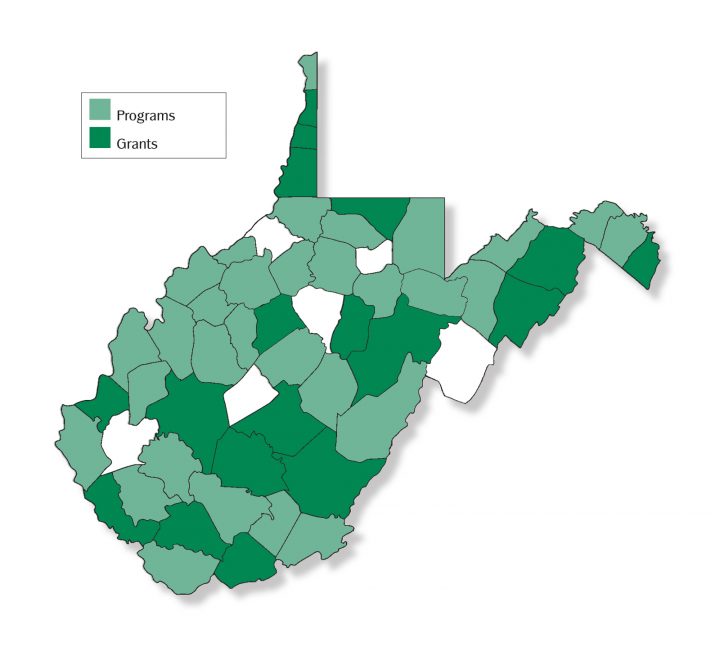 2017 Map of Grants and Programs