City of Ravenswood, "The Forgotten War"

In the last year we were awarded 52 grants and nine fellowships, and supported nearly 400 programs and events in 49 counties across the Mountain State.  Our 2019 McCreight Lecturer in the Humanities Denise Kiernan delivered one of the series’ most enthusiastically received talks, speaking from her book The Girls Of Atomic City: The Untold Story of the Women Who Helped Win World War II.  And the Council’s West Virginia Folklife Program mounted several “Folklife Apprenticeship” showcases at which audiences were treated to discussions and performances of traditional old-time fiddling and blues/black gospel song by our Master-Apprentice pairs.

The Council funded a Civil War symposium at Independence Hall in Wheeling as part of the city’s Sestercentennial celebration.

Our annual McCreight Lecture in the Humanities featured Denise Kiernan, New York Times Bestselling author of The Girls of Atomic City: The Untold Story of the Women Who Helped Win World War II.

In 2019 the Humanities Council awarded 52 grants in 24 counties throughout the state.

A Council grant supported an archaeological dig at the French and Indian War site Ashby’s Fort in Mineral County.

Council folklorist Emily Hilliard contributed to the collection The Food We Eat, The Stories We Tell: Contemporary Appalachian Tables, published by Ohio University Press in October 2019.

We presented 150 History Alive! programs in 43 counties with portrayals of historical figures such as Benjamin Franklin and Harriet Tubman.

Nine fellowships were awarded to scholars in locations around the state, including Ansted, Huntington Parkersburg, and elsewhere.

e-WV staff gave a tutorial to Cabell County West Virginia Studies teachers in Huntington, demonstrating the features of the website, its connected lesson plans, and how they can be used in the classroom.

The Council partnered with West Virginia Public Broadcasting on their new Inside Appalachia folkways reporting project.

We wrapped the first year of our Folklife Apprenticeship Program with two free public showcases at the Humanities Council’s MacFarland-Hubbard House.

The West Virginia Humanities Council board of directors is drawn from all parts of West Virginia. Click to see our list of board members and their locations. 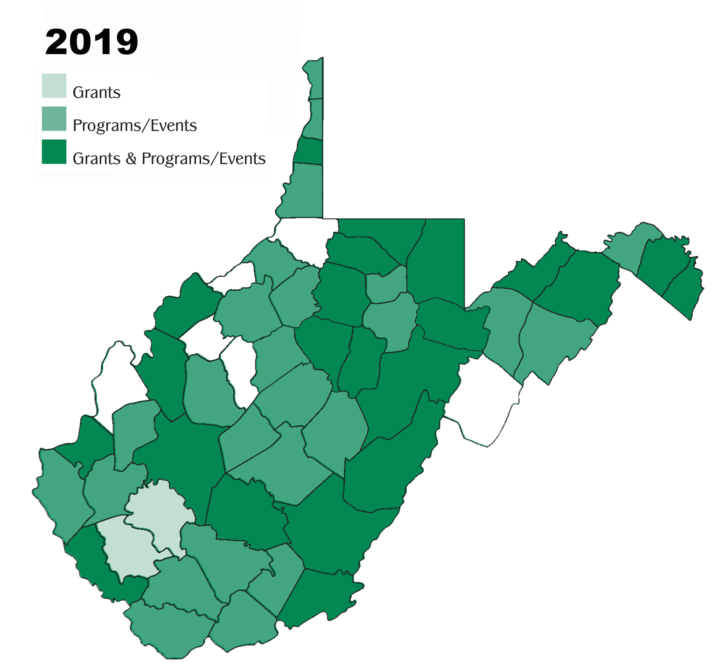 2019 Map of Grants and Programs